This simply the quirkiest museum you’ll ever visit full of endless cabinets of interesting archaeological and anthropological curiosities.

When you step into the Pitt Rivers Museum the first thing you’re likely to say is ‘Wow’. Walking into this space feels like entering one of the Indiana Jones adventures where weird and wonderful things are awaiting you around every corner.

Anticipate to see artefacts from all around the world crammed in glass cabinets, packed into drawers, and hanging from the ceiling. It’s a place where one can get completely lost searching through not only the exhibits but also digging for treasures in the draws.

Image credit: Interior of the Pitt Rivers Museum by Geni.

The museum was founded in 1884 by General Augustus Pitt Rivers, soldier and archaeologist, who was fascinated by cultural objects and had huge influence in the development of modern archaeology with his invention of a classifying system for those objects, called typography. In 1884 Pitt Rivers donated his collection of 27,000 items to Oxford University on condition that the university sponsor a permanent lecturer on anthropology. 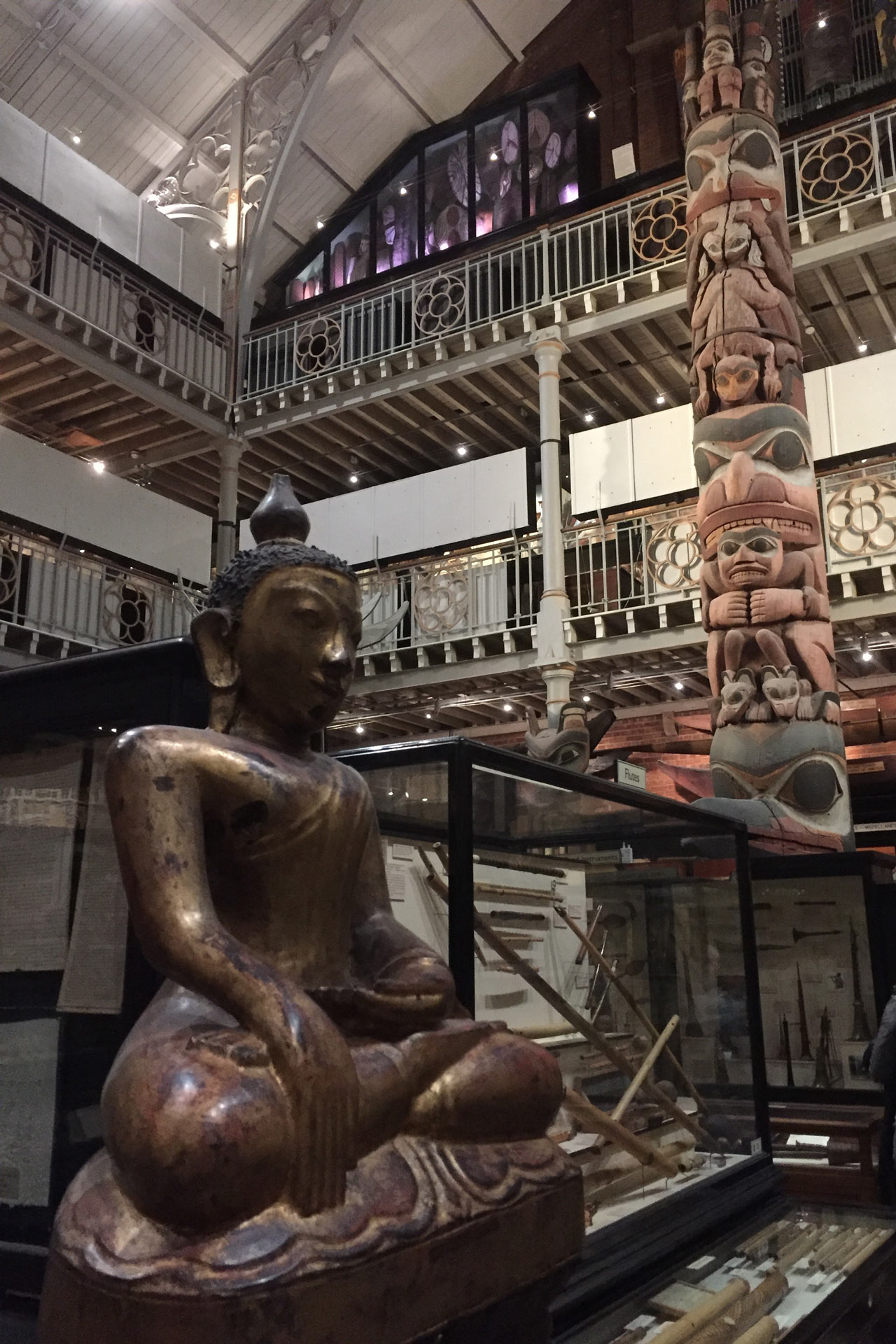 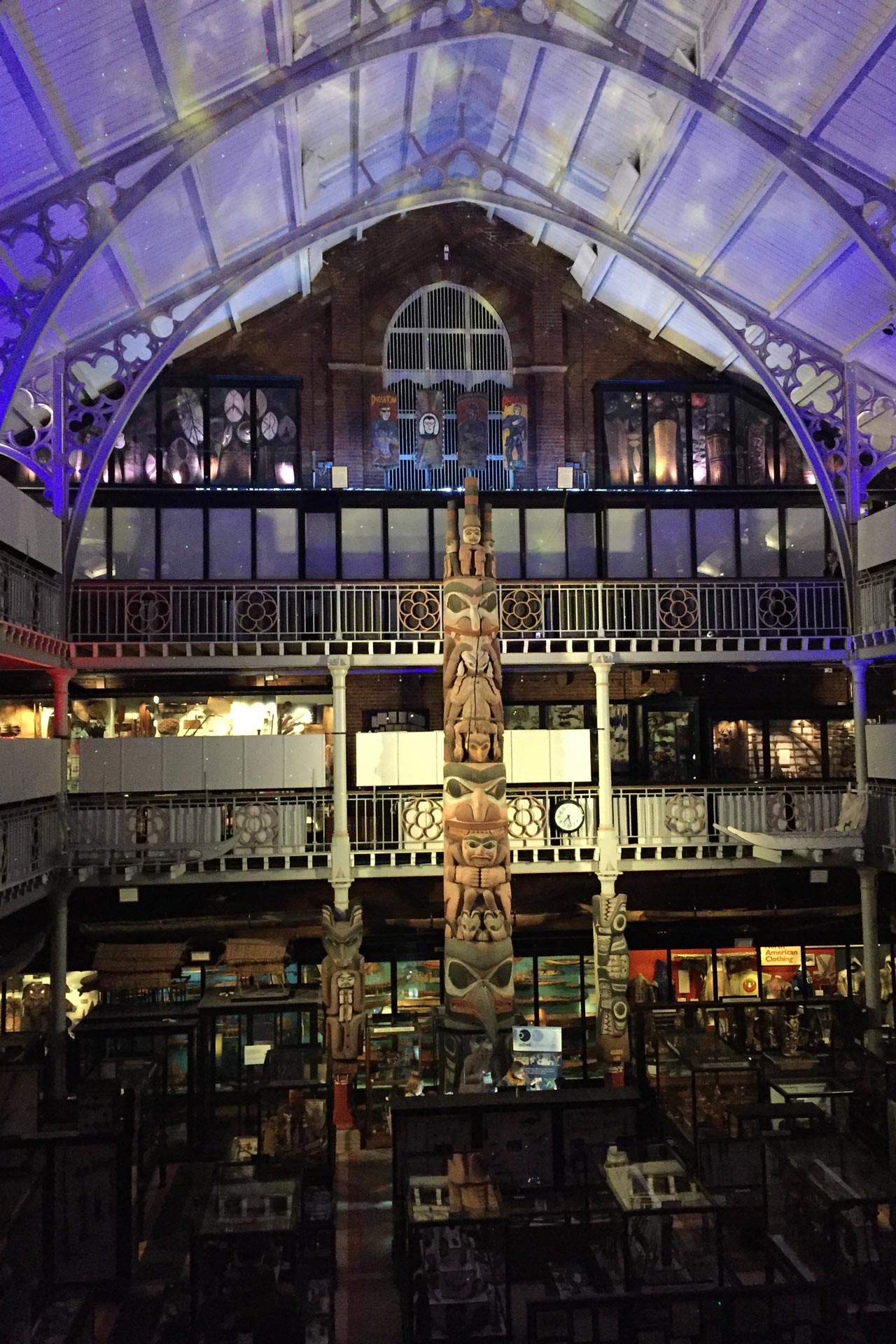 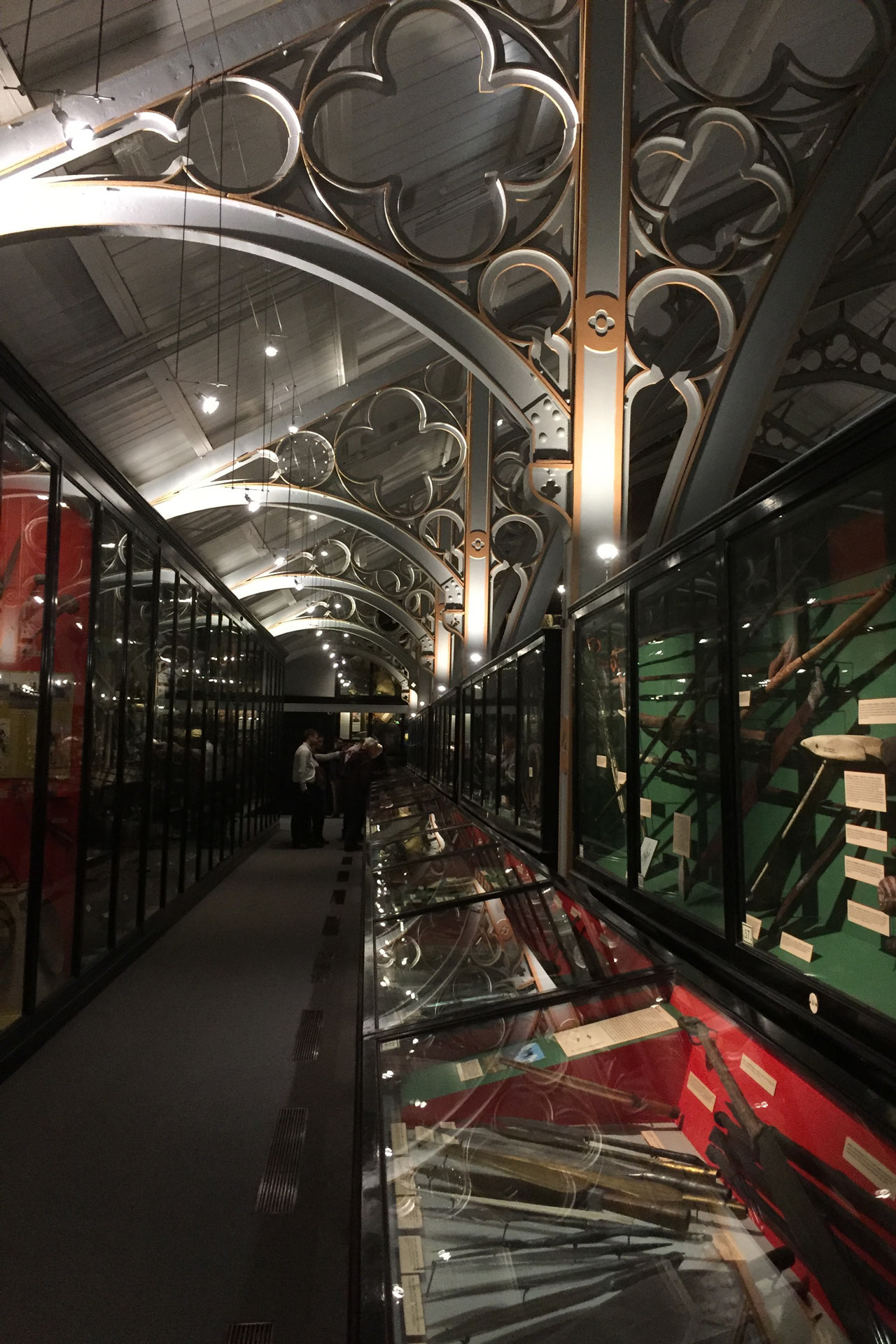 Pitt Rivers Museum was designed by Thomas Manly Deane and Benjamin Woodward, who built the original Oxford University Museum of Natural History building three decades earlier, with an intention to house Pitt Rivers’ collection. The construction started in 1885 and was completed in 1886.

The current collection consists of 600,000 items, many of which have been donated by travellers, scholars and missionaries. The collections are arranged thematically by form and function, according to Pitt Rivers theory that the objects should show the development of humankind from the simple to the complex. So, for example, you can see displays of a particular type of tool across the world, rather than having objects grouped by age or geographical origin.

Objects are divided into subjects such as ‘Magic’, ‘Ritual’, ‘Religion’, ‘Smoking’, ‘Weapons’, ‘Body Art’ or ‘Treatment of Dead Enemies’. The museum is still actively collecting, so objects are continually being added to the striking collection and displays are changed periodically.

The Pitt Rivers is intrinsically linked with the work of the University of Oxford – teaching and research takes place within the museum building and the museum’s curators are all lecturers at the University in cultural anthropology or prehistoric archaeology. 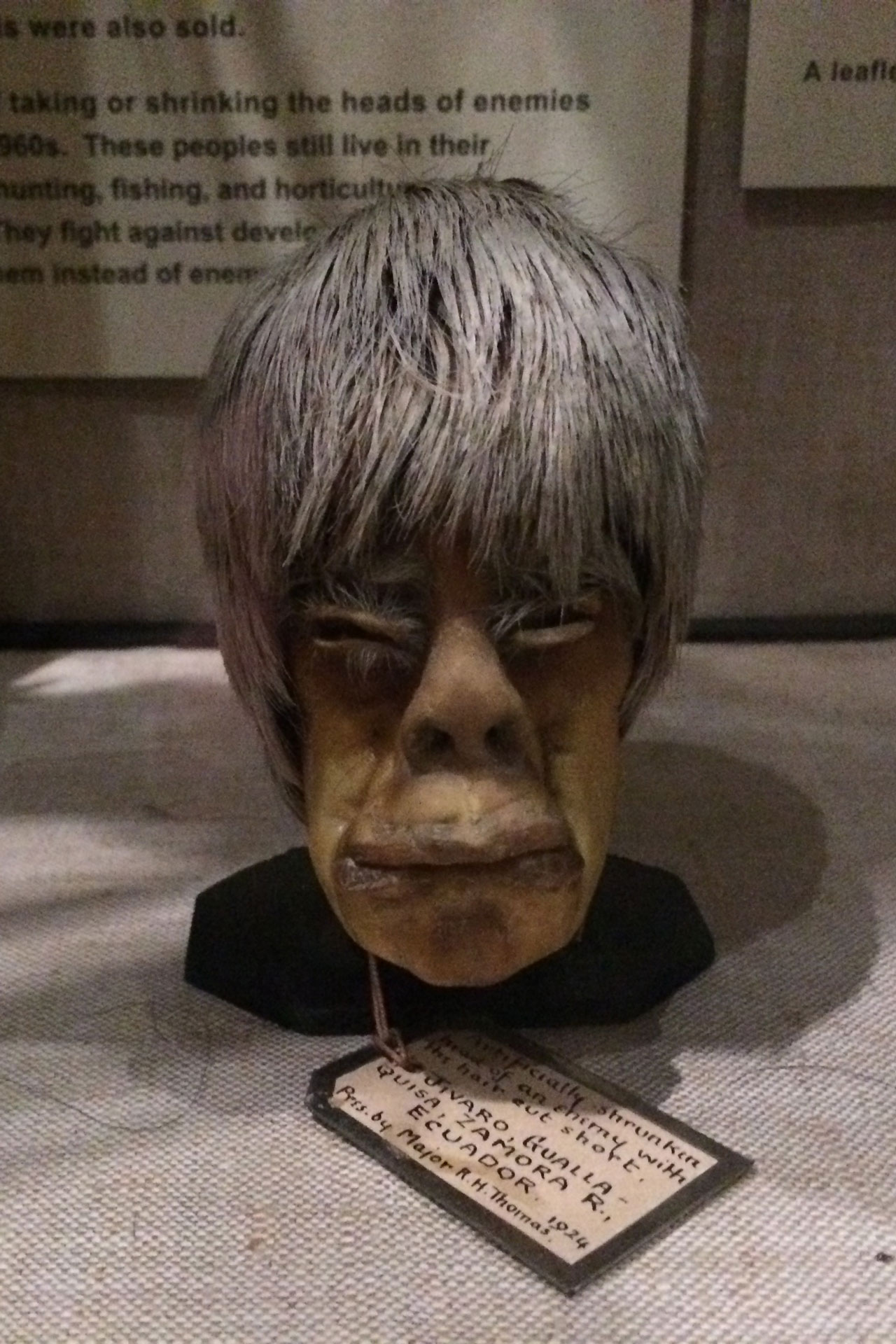 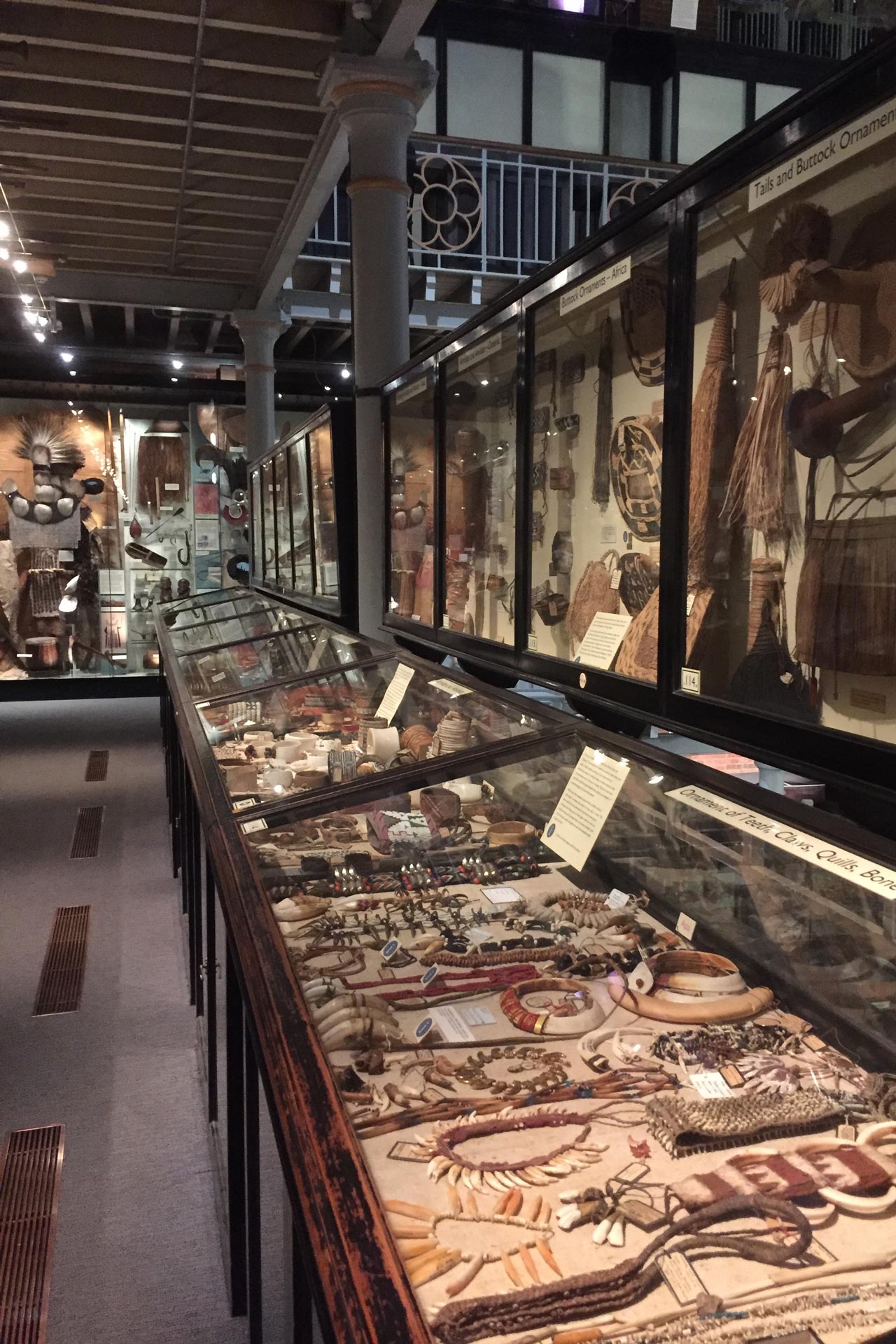 The highest object in the Museum is the Haida totem pole (11.36m high) which came to the Pitt Rivers Museum in 1901 from a Haida community. It originally stood outside Star House in the village of Old Massett (Haida name Uttewas), on Graham Island, in British Columbia, Canada. The house was built around 1882 and belonged to chief Anetlas.

One of the most popular objects in the Museum is a collection of of shrunken heads by Andes tribes to capture the unfortunate person’s warrior soul. They are a mixture of human, sloth and monkey heads that have had their skull and brain removed and the skin heated and cured. As a result the head shrinks but the hair does not.

From the cabinets of horrors to weaponry and instruments, this cathedral of cultures is full of interesting archaeological and anthropological curiosities. You can spend ages looking at the musical instruments, body piercings, dance masks, textiles, boats, armour, locks and keys. You just don’t know what interesting things you will come across.

The Pitt Rivers Museum inspired the Knockturn Alley magic shop in Harry Potter? Or that it was also the ‘museum’ where Lyra found trepanned skulls in Philip Pullman’s ‘The Subtle Knife’ (His Dark Materials trilogy)?

The museum is accessed through the Natural History Museum which is slightly confusing, look for a small door located at the back of it.

Making a visit to the Pitt Rivers means entering a world filled with man-made wonders where artefacts from the past and from across the globe help bring that diversity of human culture to life. You could easily spend the whole day at this excellent museum and barely scratch the surface of all it has to offer. Make sure to return again and explore more slowly its collection of weird and wonderful items.

Before your visit you may also enjoy listening to Pitt Rivers Museum’s audio podcast.

Audio guide:
Before you begin exploring, spend £2 on an audio guide (suitable for adults and children) to easily learn more about this fascinating museum.

Café:
The Pitt Rivers does not have a café of its own but you can easily visit the café on the first floor in the Natural History Museum.

Accessibility:
There is a platform lift at the main entrance from the OUMNH for wheelchair and pushchair users. A disabled parking space can be booked in advance, tel: 01865 270927.