Oxford’s the most iconic and beautiful landmark.

There must be millions of photos of this photogenic and the most iconic of Oxford building’s – a library with more than 250 year history. It’s almost impossible to walk near the Radcliffe Camera without pausing to look at its beauty and also don’t get distracted by the grandness of the surrounding buildings.

There’s something about Radcliffe Camera that makes for great pictures. Its circular spectacular structure is the perfect example of how to create a cathedral for knowledge. It’s not a surprise this stunning location inspired CS Lewis who while pressing through the rush of people dressed in the heavy coats trudging through the snow outside the Camera, thought of the idea of peering through the coats in the wardrobe. Also, the intricately carved door and lone lamppost are said to have given him some ideas as well. 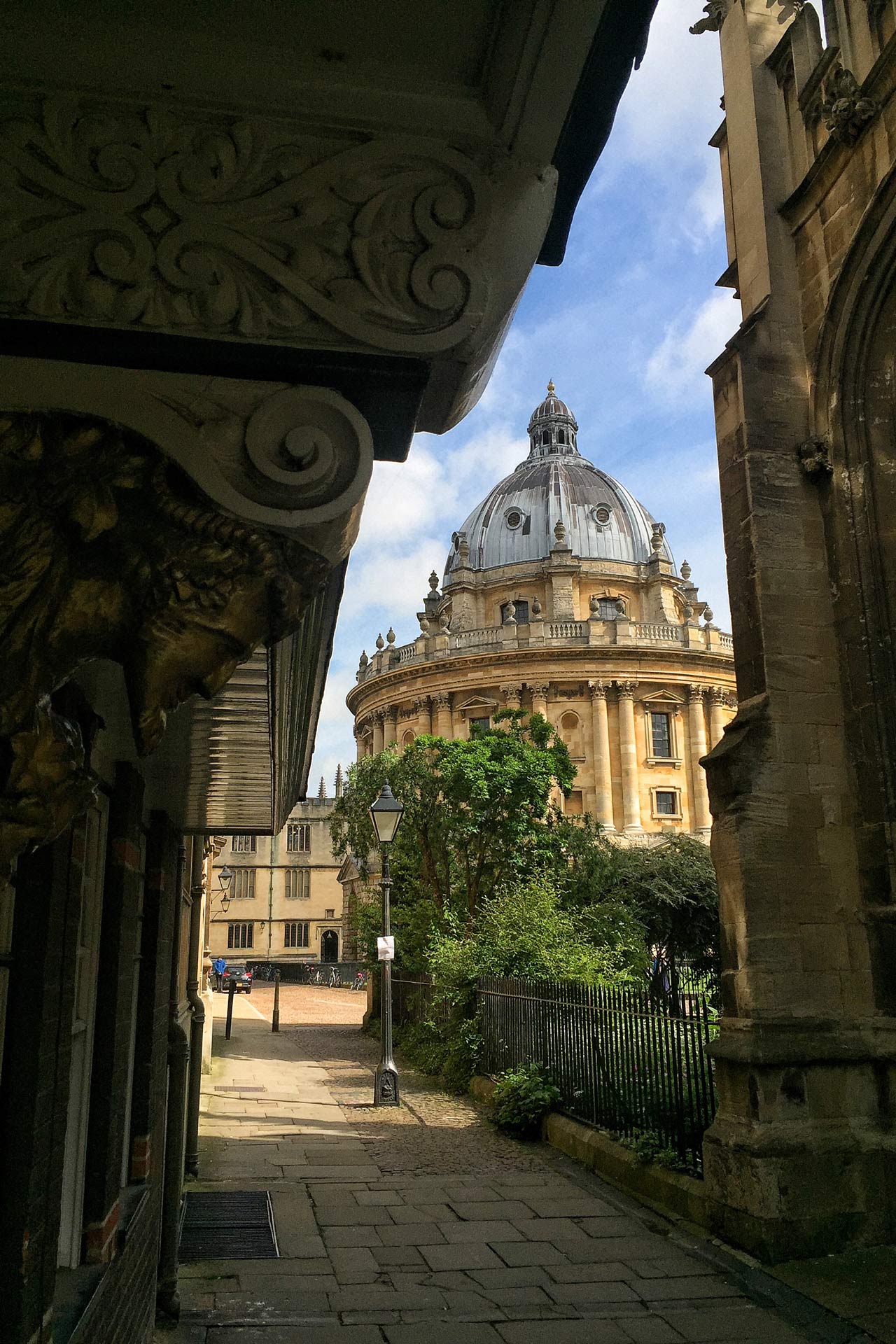 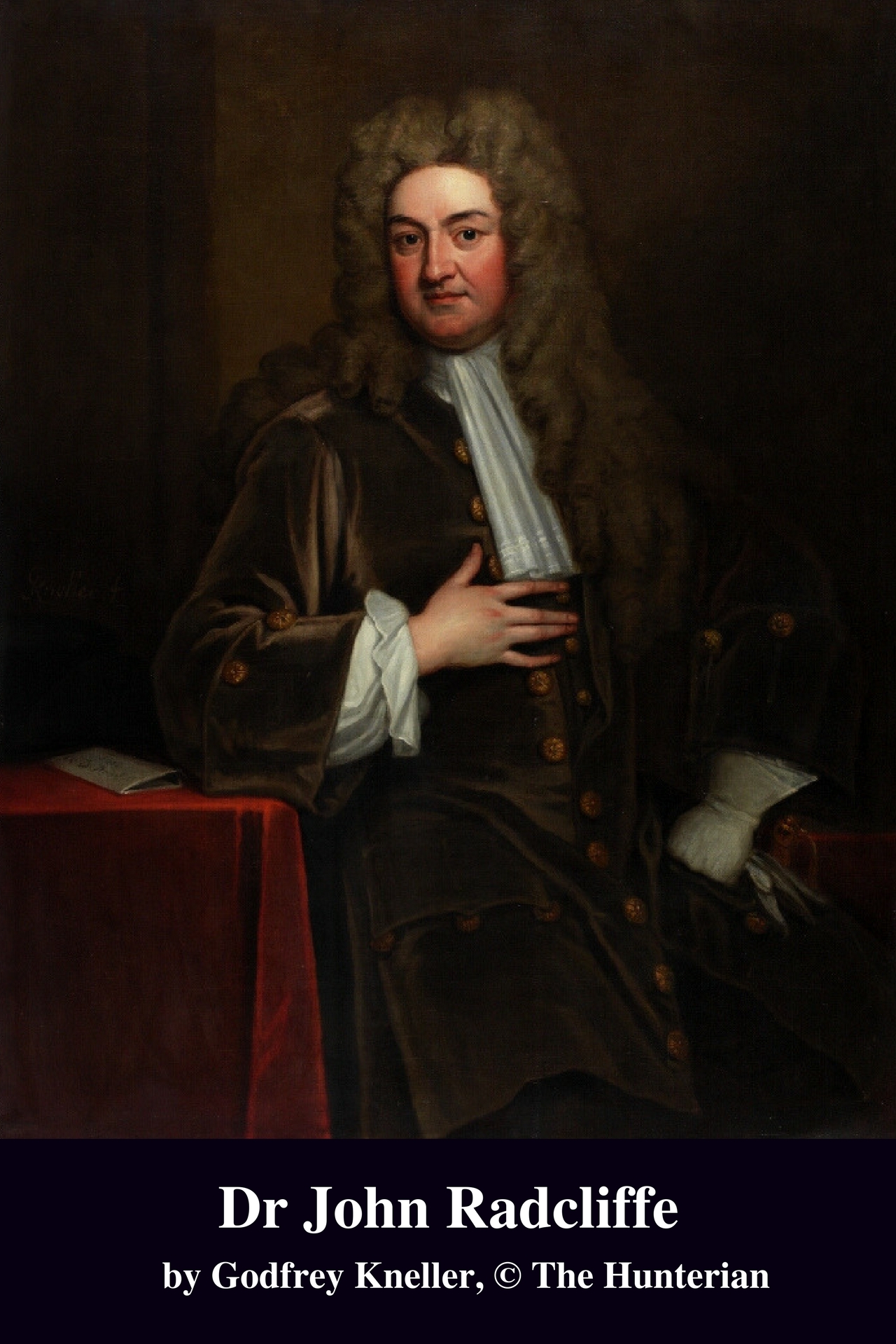 The Rad Cam, also known as the “heart of Oxford”, was designed by James Gibbs built between 1737 and 1749 with £40,000 founded by Dr John Radcliffe upon his death in 1714. Radcliffe, the most successful physician in England, began to explore the idea of a library about two years before his death. Three of his schemes propose a rectangular building and two a rotunda. In his will he decreed that the money left should be used to purchase land, build a library, purchase books, and pay a full-time librarian. Radcliff even laid out where the library should be built, despite the fact that the land was currently occupied several rows of tenement housing for University staff and a large set of gardens belonging to Brasenose College.

£100 a year were also provided to maintain the new library, but only once 30 years had elapsed from Radcliffe’s death. It would, however be more than thirty years after Radcliffe’s death before the first stone was laid as the negotiations for buying and demolishing the existing properties on the site were long and complicated.

Want to see more? Visit the full gallery and get to know the Radcliffe Camera better.

In 1721, a number of leading architects were invited to submit initial sketches for the Radcliffe camera structure, including Nicholas Hawksmoor (responsible for much of All Soul’s College) and James Gibbs Wren, Vanbrugh, Thornhill, Archer and James. However, it was not until 1734, that just two men were invited to submit final plans; Nicholas Hawksmoor and James Gibbs. Hawksmoor created a scale wooden model of his proposed design which can still be seen in the Ashmolean today.

The Radcliffe Camera is the first example of a circular library in England. It has since become an additional reading room of the Bodleian Library consists of three main stages and of two stories internally, the upper one containing a gallery.

In the end it was Gibbs who won the competition with his circular library, the first such library of its kind in Britain, which dome’s resembles the vertical aspirations of the dome of Michelangelo’s St Peter’s in Rome. The building was completed by 1748 to house the Radcliffe Science Library and was opened to students a year later. 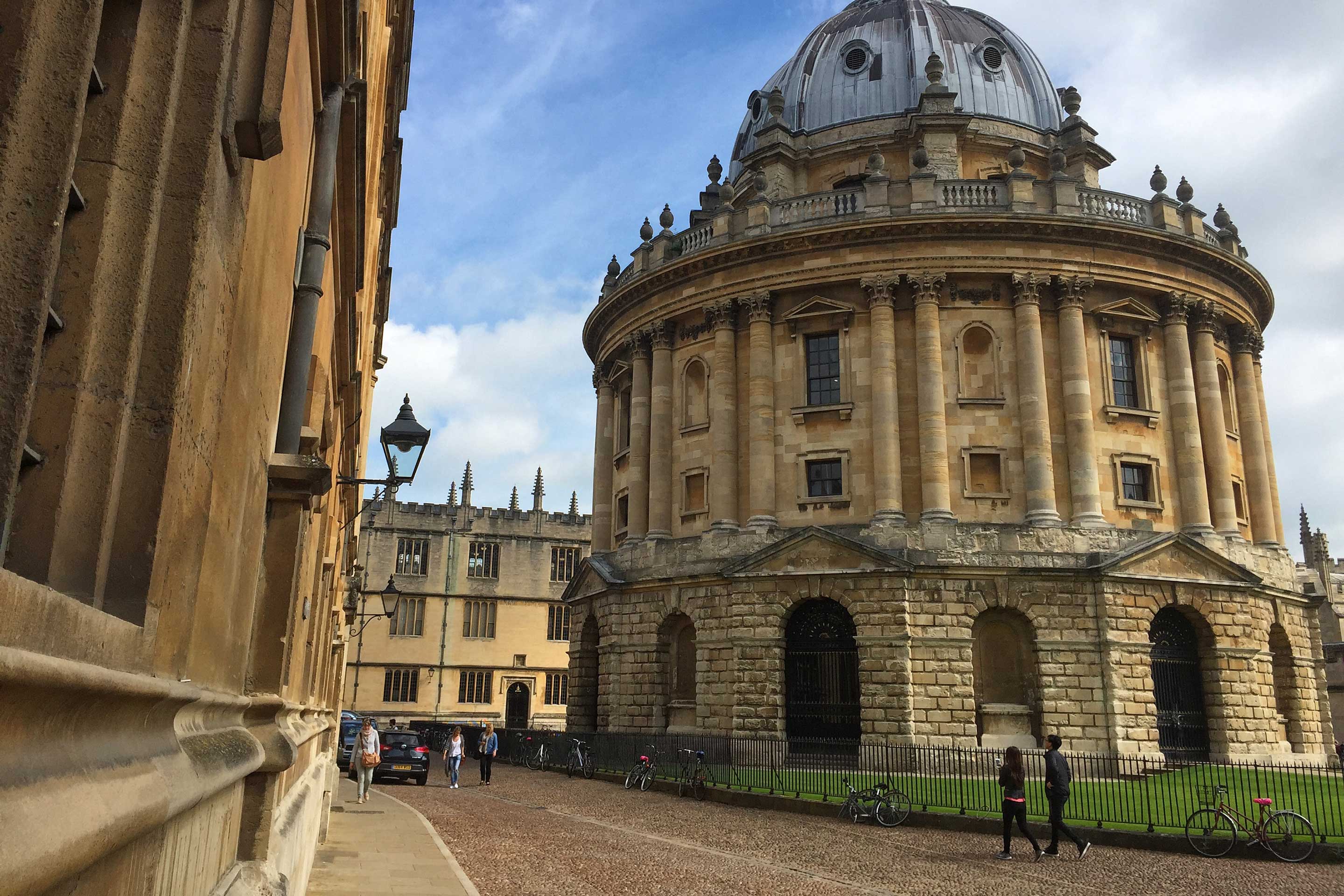 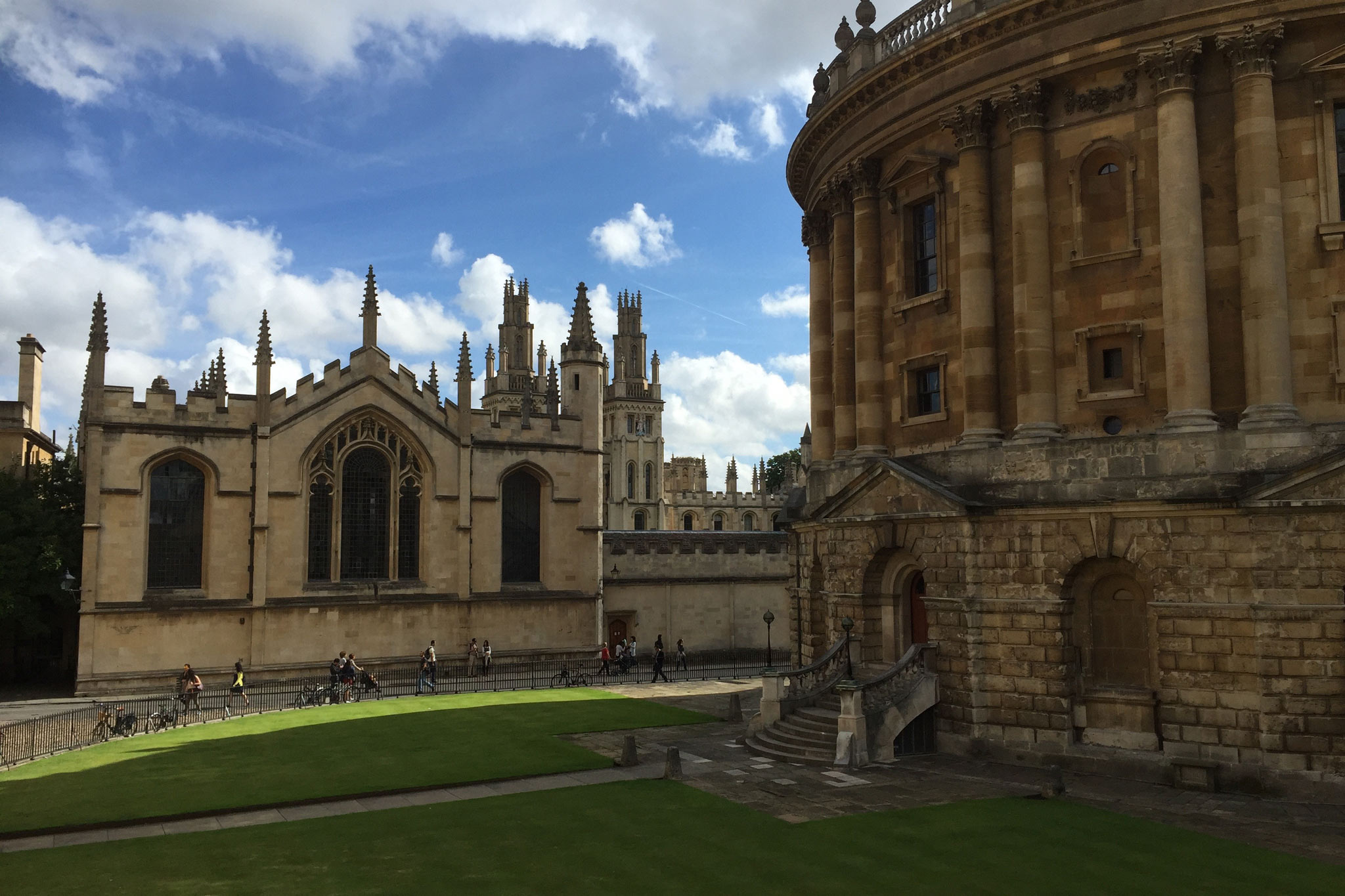 In 1860 the Radcliffe Science Library was taken over by the Bodleian Library and was renamed the Radcliffe Camera. The Camera’s collections were gradually moved to other University libraries, so that today the Camera functions as the main reading room of the Bodleian.

The Radcliffe Camera was originally envisaged as a sort of memorial or mausoleum to celebrate the life of Dr John Radcliffe, who also endowed the University with the Radcliffe Infirmary and the Radcliffe Observatory. Since its completion, the interior and the exterior of the Camera has been admired by many.

The Library consist of two reading rooms, used primarily by undergraduates. The Upper Reading Room holds books on History, Art, Archaeology, and Anthropology, while the Lower Reading Room is focussed on English Literature and Theology. In terms of the design the structure of the Library is somewhat architecturally extravagant as the space for books is restricted to the alcoves and around the open central spaces.

There is space for around 600,000 books in rooms beneath Radcliffe Square! An underground bookstore lies beneath the lawn to the north of the Camera, and is linked by tunnels with the Old Library.


Between 1909 and 1912 an underground bookstore of two floors, called “the Radcliffe Link” or “the Link”, was constructed beneath the north lawn of the library with a tunnel connecting it with the Bodleian. In 2011 “the Radcliffe Link” was refurbished as reading rooms, and opened as the “Gladstone Link”. 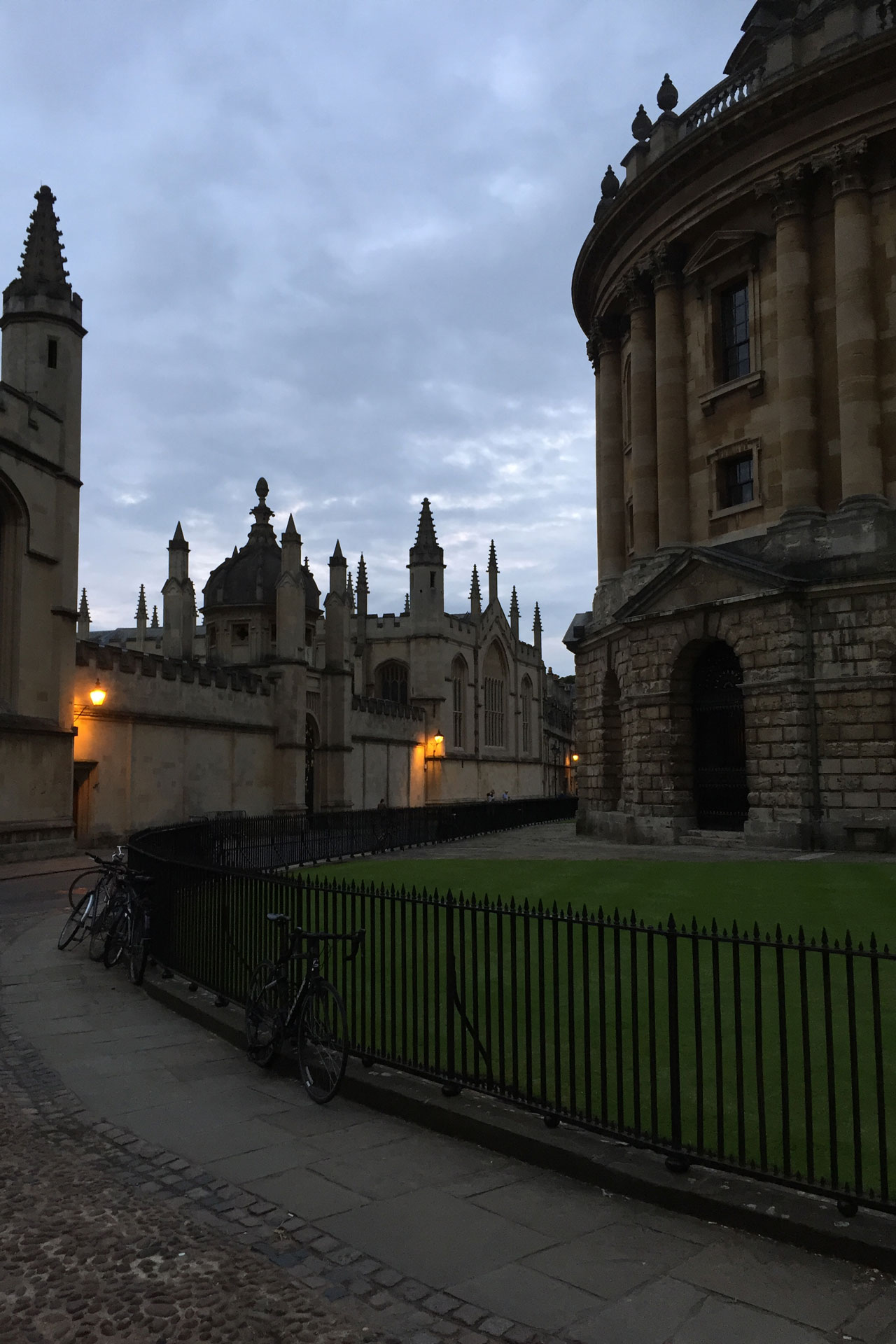 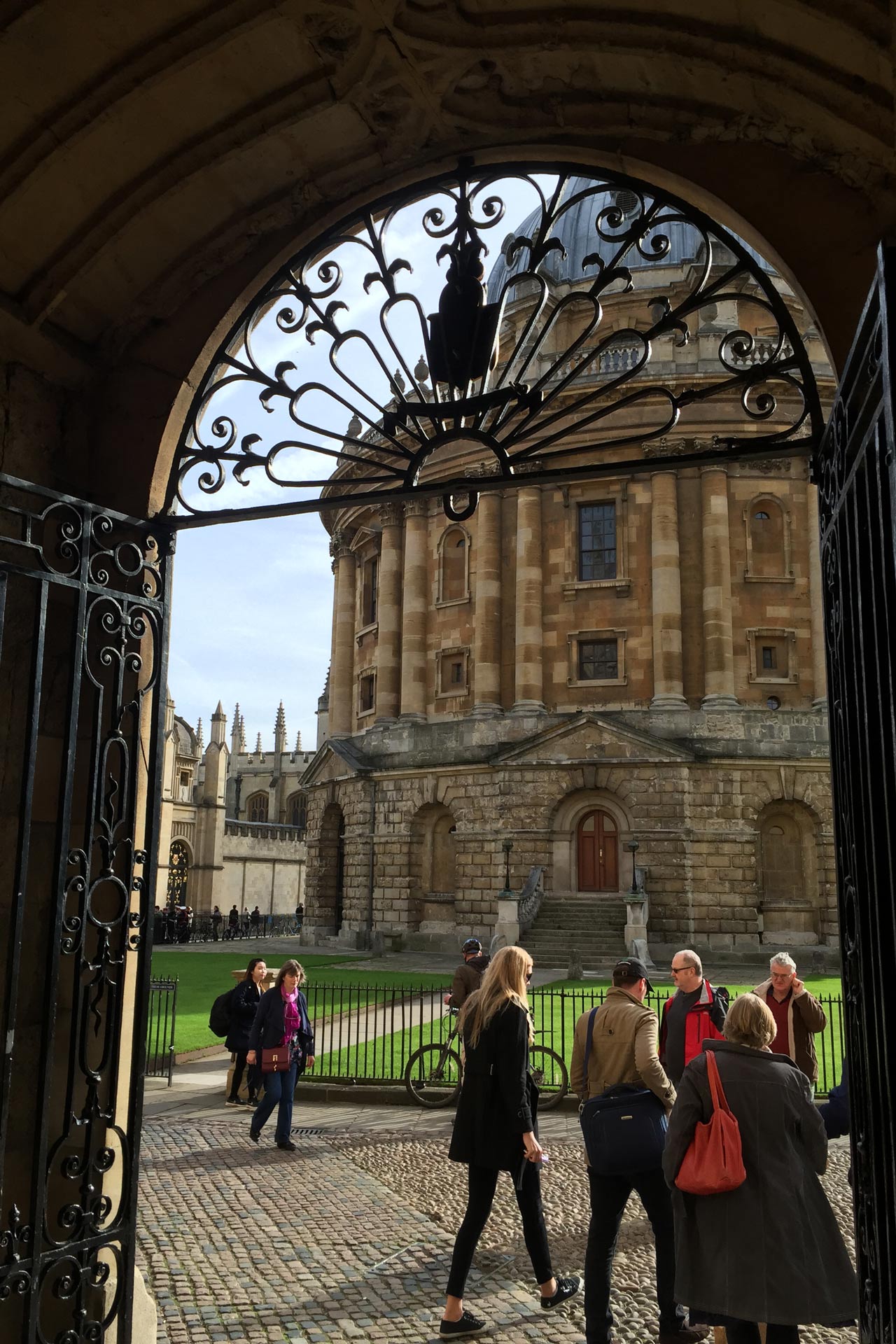 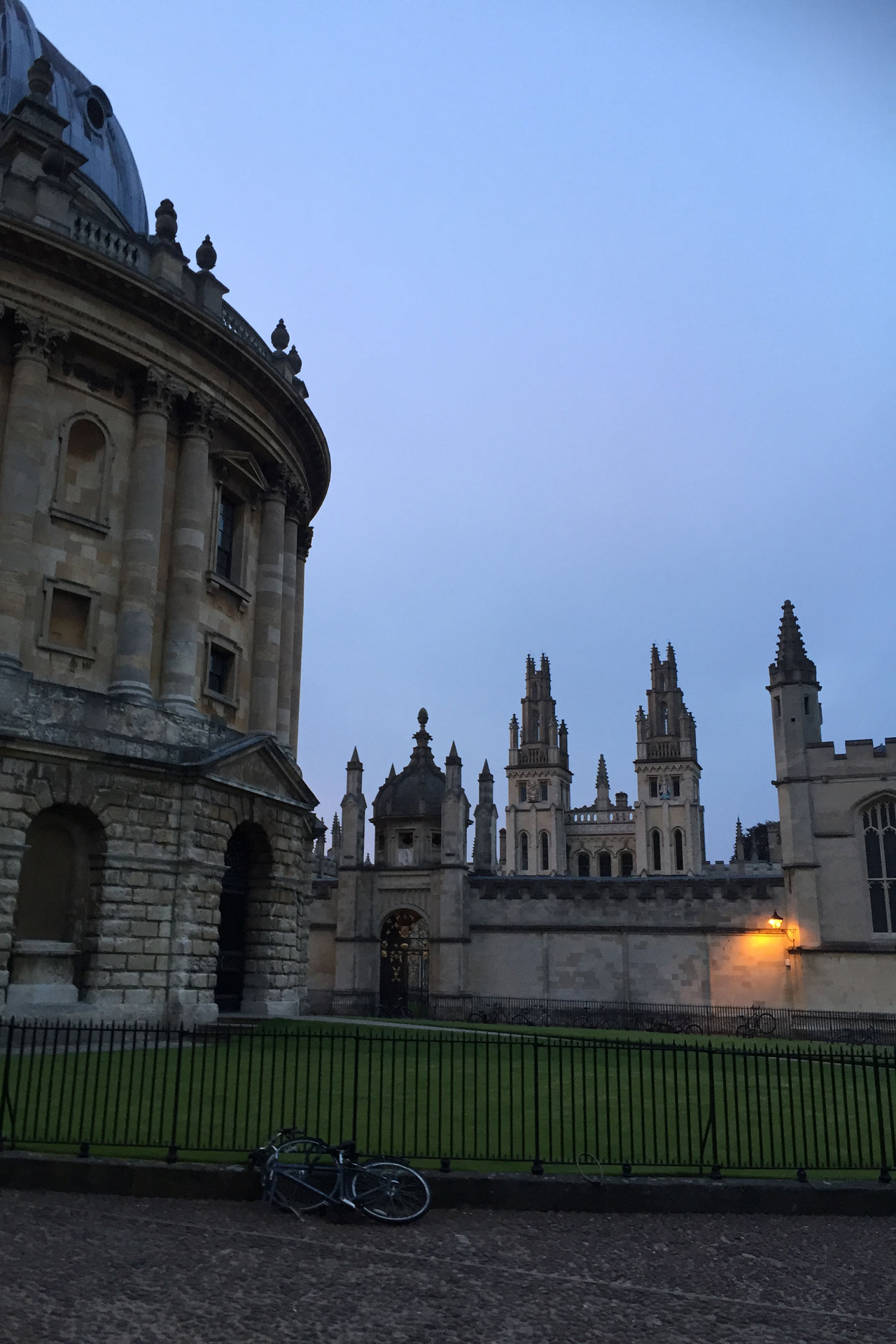 When exploring Radcliffe Square make sure to visit other nearby attractions such as Bodleian Library, Brasnose College, Bridge of Sights and The University Church of St Mary the Virgin, which offers the best view of the square from the top of its tower.

The gorgeous building has been mentioned by many popular novelists such as J.R.R. Tolkien as well as CS Lewis, and featured in many famous television series, such as Inspector Morse, Inspector Lewis and Endeavour. The Camera was used as a location in the films like film The Golden Compass, Young Sherlock Holmes, Opium Wars, The Saint, and The Red Violin.

Tours:
The building is part of the Bodleian Library, and you can only gain access on one of the tours, which only occur a few times a week.

Bodleian Café:
In need of a break? Enjoy a bite to eat at the new Bodleian Café in the Weston Library.

Tours:
The exterior of the Library is extremely photogenic. If you want a good shot, go early in the morning to avoid the crowds.